Different, but still the same

Previous Next
Different, but still the same

I was sitting at home looking through my diary for last year and looked at two weddings in particular.  They were held on one day and the next, but apart from them being held in the same week, and that there was a bride and groom at each one, the similarities almost end there.  I was in Inverness at the beautiful Loch Ness Country House Hotel, having driven up from Fort William, and despite it being the summer months, made it there in good time.

I went into the hotel and changed into my kilt outfit.  Always looks great and is good for the tourists to see that we do sometimes wear the kilt etc.  When dressed, I set about looking for the groom.  I quickly found him and relieved him of the responsibility for the schedule.  I could sense his relief at having handed that over, as I had told him that without the schedule there would be no wedding.   Having got to know the bride very well during our meeting and telephone conversations about the script, Mike knew he had a few important things to do, but the most important was keeping the schedule safe until I asked for it.

I went into the wedding room and started rearranging things to work the way I wanted.  As luck would have it, the videographer was there setting up, so we had a good wee chat about the symbolic gestures etc, so that he could be in the right place at the right time to capture them.  Guests were arriving at a steady pace and with Michael’s help, I tracked down the best man, (check that he had the rings), ushers to make sure they knew what their duties were, most important of all was gathering all the guests together in the room so as to start on time.

It was now half an hour until the start of the ceremony and I had a quick five minutes and a welcome cup of coffee.

Back to work and the piper started playing a selection of tunes while the guests all made their way through. 5 minutes until start time now and I gathered the groom and best man and took them in to where they would be standing for the ceremony.

Michael was really nervous by this time and the best man and ushers were telling him that the bride had changed her mind.  Instead of getting married, she was taking all the money gifts they had been given, and going off on a cruise (the honeymoon) with the Chief bridesmaid and they were going to party on, into the night.

Ceremony start time and I cleared my throat and announced to the guests that we would be starting shortly, but Vicki hadn’t arrived yet, but the bridesmaids who had been getting dressed at Vicki’s house told us that she shouldn’t be too far away.  The piper was still playing and the guests were still all assembled, but still no Vicki.

40 minutes after the scheduled time, and on one of my many trips to the front door, Vicki eventually arrived.  They had been held up twice on the way to the venue, by boats going through the canal.  The photographer was asking if she would pose for some pictures before getting out of the car, but she got out and told him there was no time, grabbed her dad by the arm and almost dragged him into the hotel.

I told the piper that we were ready and he started playing the entry music for the bridal party.

Michael’s relief was palpable.  He was such a gent, really pleasant and easy going, but the delay had taken its toll and he almost shed a tear of joy when I told him that Vicki had indeed arrived.  His face lit up and he was smiling from ear to ear as he saw his beautiful bride walking up the aisle to be by
his side.  From there on in it was a wonderful ceremony, with two pieces of poetry, handfasting and candle lighting, finished off by drinking from the quaich. I asked the guests to raise the roof as we introduced them as Mr and Mrs for the first time and they nearly did.

After their wedding breakfast was over, they were entertained for the night by the award winning local band, Wonderland.

In sharp contrast to that wedding, the one I conducted the following day was in the grounds of a castle. I had the honour of being asked to conduct the wedding of an Australian couple at Castle Lachlan, Strathlachlan.

I arranged for the couple’s meeting to be done by Skype as they were in France on Holiday. They were a lovely couple and when I asked them why they had chosen Castle Lachlan as their venue, they told me that the UK was a midway point for all the family that were to be at the wedding, some
of them living in United States and the rest all flying in from Australia.

So here I was, talking to an Australian couple, who were working in Wales, on holiday in France at the time of the Skype call, and then getting married in Scotland.

As they were foreign nationals, I had to impress on them that they would be advised to contact the local registrar’s office earlier than the normal 12 weeks before the wedding, to find out the procedures and ask for the registrar’s advice. (All the M10 forms and supporting documents were
mailed to the registrar, who then had to do the checks and mail the paperwork and eventually the schedule back to the couple.

The day of the ceremony arrived and after a nice lunch in Inverary, we drove the rest of the way to the venue. The family had rented the whole castle out for a week and the wedding was taking place on the middle day of their holiday.

After walking round the castle twice, we finally found an open door and went in and met the bride and groom, who, with some other family members, were putting the finishing touches to the buffet. In contrast to the 100 guests at the previous wedding, this one only had 16 participants, including
the wedding party.

Everyone had been assigned a task, including Ant’s sister Kelly-Marie who was Groomswoman for the day. She took her duties seriously and as we were going back outside to set up the table with the ribbons etc., I heard her telling Ant in no uncertain terms that he better get back to his room and get dressed for the ceremony.

We looked around the grounds and decided that we would hold the ceremony between two huge ancient oak trees, with Loch Fyne in the background.
It was a beautiful summer’s day and it was sunglasses all round. Once or twice I had to raise the decibel level of my voice to be heard above the rustling of the trees, but Ant and Julie are keen on outdoor activities, so even if it had been raining heavily, they definitely wanted their wedding
outdoors.

Kelly-Marie was a fantastic ‘Best Man’ and after a brief discussion of the logistics, she set off looking for the rest of the family and in almost military style, marched them down to the edge of the lawn where I was waiting for them.

The bride, escorted by her very proud father, made her ‘entrance’ by coming out of the West Wing doorway and down a concrete stairway which widened on both sides and was very picturesque with the flowers cascading over the handrails.   The bride was making the most of her grand entrance and made her way slowly from the bottom of the staircase, across the lawn, through the family members who had formed a ‘guard of honour’ and
down to where we were waiting, pausing several times for photographs.

They had chosen the same symbolic gestures as the couple the day before and the rest of the ceremony was along similar lines.  The couple had asked me to mention their grandparents who would have loved to have been there, but were no longer with us. We had a quiet reflection time for about a minute, and, being situated far away from neighbours and roads, the only sounds we could hear were the birds singing, the waves from the loch lapping on to the shore and the leaves on the oak trees being blown around on the breeze.

It was such a fantastic atmosphere, I was not surprised when after the ceremony Ant and Julie came to me and commented on ’that minute’ seeming like an eternity and the feeling that we were in tune with the planet and all of its awesome natural beauty.

I am looking forward to my outdoor weddings this year, on Camusdarach Beach and at Glenfinnan House Hotel, hoping that we can recapture a moment like that one we experienced on the shores of Loch Fyne. 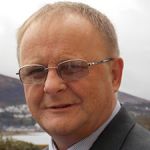